(Berlin) “Take off the masks”, “no compulsory vaccination”, or “return of freedoms! “: Several thousand demonstrators demanded Saturday in Berlin for the abolition of restrictive measures to fight COVID – 17, whose new infections are worrying the authorities.

Estimated at some 17 01 0 by the police, the participants in this motley procession bringing together “free thinkers”, anti-vaccine activists, conspirators or even far-right sympathizers, were in the end much less numerous than the 500 00 0 announced by the organizers of this mobilization entitled “the end of the pandemic – Freedom Day”.

Among those who were heading under a strong heat towards the Brandenburg Gate, several chanted “we are the second wave”, “resistance” or even “the biggest conspiracy theory is the pandemic of the new coronavirus”.

Few of them wore a mask, according to an AFP journalist, and the physical distancing of five feet normally required was not respected.

“If physical distancing cannot be applied, we will continue to speak to the organizer of the event and this may indeed lead to the dissolution of the demonstration”, warned the spokesperson for the police of the German capital Thilo Cablitz.

Shortly after, and despite repeated calls from the police asking the demonstrators with the help of megaphones to respect the barrier gestures, the police announced on Twitter that they had “filed a complaint” against the organizer of the event due to “non-compliance with hygiene rules”.

These should disappear, believe the demonstrators for whom the health crisis is now over.

“It's a pure fear tactic: I don't see any danger with the virus at all. I don't know other sick people. I knew a lot of sick people in March, skiers, vacationers, there was really something going on in February, but now there are no more sick, “Iris Bitzenmeier told AFP.

An opinion shared by Anna-Maria Wetzel, who arrived with about fifteen friends from Baden-Württemberg (south-west) where she has already taken part in several similar gatherings in Stuttgart.

“People who do not inform themselves, unlike us, remain ignorant and believe what the government tells them. They go into fear that the government is putting us in our heads. And fear weakens the immune system, ”she claims.

Several counter-demonstrators, including a procession of “grandmothers against the far right”, called these activists “Nazis”.

The motto of the protest, “Freedom Day”, is also the title of a film by Nazi director Leni Riefenstahl about Adolf Hitler's party conference NSDAP in 1935. 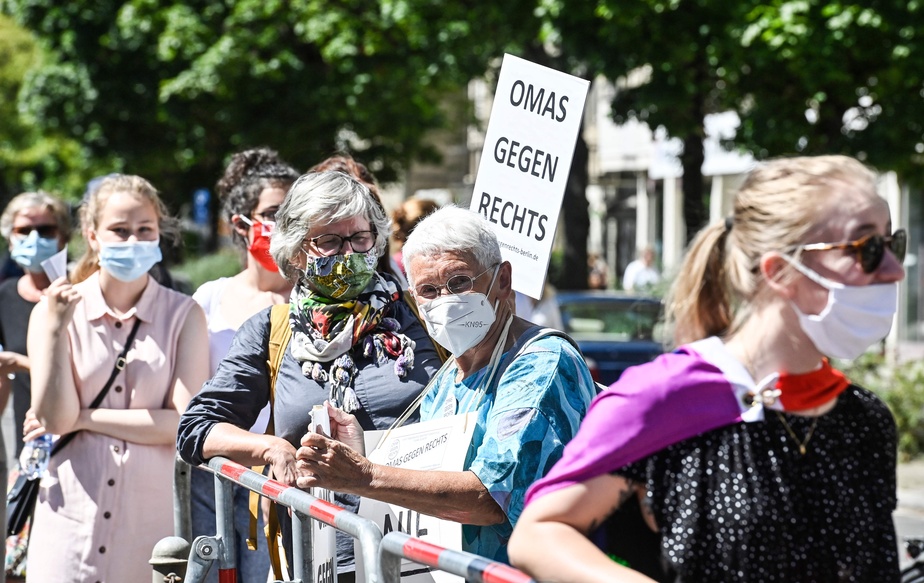 Saskia Esken, head of the Social Democrats, a minority party in the government coalition with the conservatives Angela Merkel, lambasted these “Covidiots”.

“Without distance, without mask: they not only endanger our health, but also our success against the pandemic and for the revival of the economy, education and society. Irresponsible! She wrote on Twitter.

Jan Redmann, leader of the CDU in the Parliament of the Land of Brandenburg, estimated on this same social network: “955 new infections a day still and in Berlin there are demonstrations against anti-coronavirus measures? We can no longer afford these dangerous absurdities ”.

The Minister of the Interior Horst Seehofer showed himself to be more understanding towards them in an interview with the Passauer Neue Presse: “Of course, there are always different opinions when it comes to infringements of fundamental rights and restrictions on liberty. But first it is normal and then, in my opinion, it is not the majority “.

If Germany has so far been rather spared by the pandemic which has made less than 9200 Dead, the authorities are alarmed by a slow resumption of infections. On Saturday, their number increased by 924 compared to the day before, a level that did not was more affected since May 9, according to the Robert Koch Health Institute.