After Portland, other American metropolises are in the President’s sights. Cities that are all under Democrat control.

Donald Trump announced Monday that he intends to send federal agents to reinforce several cities struggling with insecurity problems. He said that cities like Chicago, New York, Detroit, Oakland and Baltimore headed by elected “Democrats” could be targeted as a priority.

The president was pleased with the results obtained with this approach in Portland, Oregon, ignoring the outrage of local elected officials who accuse the agents recently sent by Washington of behaving like an “army. occupation ”.

Politicians opposed to this move “are weak” and “they are afraid” of people demonstrating, Trump said, calling the protesters “anarchists.”

“We are not going to let down New York, Chicago, Philadelphia, Detroit and Baltimore,” he said, accusing their leaders of being from the “radical left”. “If Joe Biden were to be elected, […] the whole country would go to hell. “

Assistant Secretary for Homeland Security Kenneth Cuccinelli said on Sunday that the administration had “no intention” for the time being to withdraw the agents sent to Portland to promote a return to calm in the wake of demonstrations linked to the Black Lives Matter movement.

The agents in question, Cuccinelli explained, are from rapid deployment units that were formed to strengthen the protection of buildings and monuments under federal jurisdiction at the request of President Trump. They mainly come from immigration and border control services.

Their action in Portland received widespread media coverage in the United States last week after protesters complained of being apprehended by unidentified officers in unmarked vehicles. 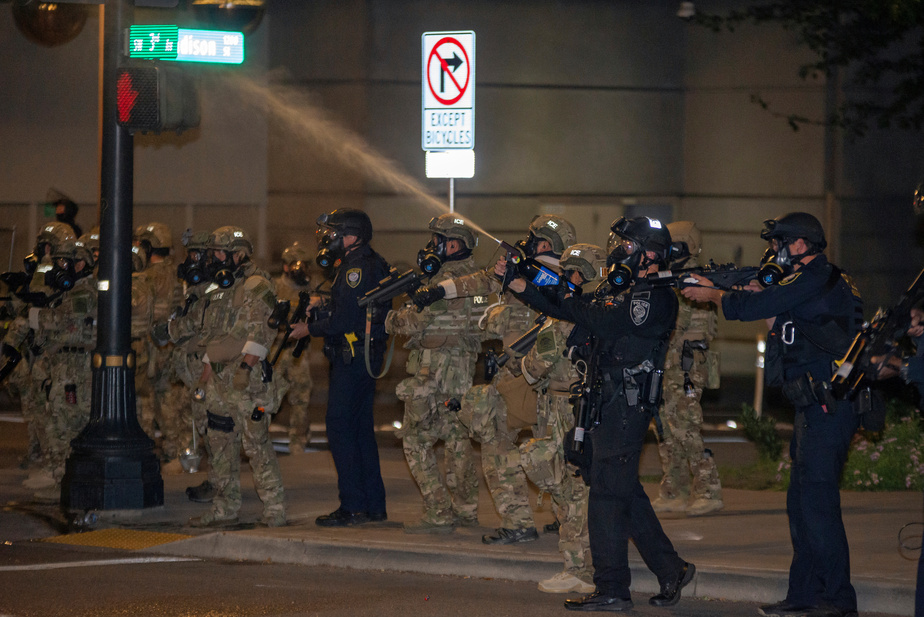 An activist of 26 -year-old Mark Pettibone told local radio that he was “terrified” when men in military fatigues with no apparent identification stopped him on the street and took it away in a van without telling him why. He was subsequently detained for a few hours in a federal courthouse and released without further formalities.

Other interventions of a similar nature have been noted, angering several elected officials, including the mayor of Portland, Ted Wheeler, who equates the federal forces with “Trump's personal army.”

“Their presence is unwanted and does not help improve the situation,” said the leader of the city, which has been facing daily protests for nearly two months.

Clashes in front of the courthouse

Several clashes took place in front of the federal courthouse, which was the target of numerous acts of vandalism.

There is 10 days, an activist of 21 year old who was standing not far from the building was hit in the face with a bullet “no lethal ”shot by a federal agent, sustaining serious injuries.

This incident as well as the arrest of Mark Pettibone are mentioned in a lawsuit announced Friday by the State Attorney General, Ellen Rosenblum, who accuses the federal government “of exceeding its powers by injuring or threatening peaceful protesters ”on the streets of Portland.

The local American Civil Liberties Union has also taken court action to force federal agents not to attack journalists and legal observers who monitor their actions.

The organization reports in particular that a journalist was hit by a dozen rubber bullets while taking care to walk away following a warning given to protesters.

Rafael Jacob, specialist in the United States attached to the Raoul-Dandurand chair of the University of Quebec in Montreal, notes that the federal government has the right to deploy agents in the current circumstances in order to protect its infrastructures and to counter crimes under federal jurisdiction.

Courts could however conclude that the methods used to achieve these ends are illegal, notes the analyst.

The political nature of the White House initiative should not be overlooked, he said, since the US president has long campaigned on “law and order” issues.

Democratic Leader Nancy Pelosi has said her party will not allow Oregon residents to be used for “Trump's political games.”

Third federal execution in one week in the United States

New rescue of the Ocean Viking in the Mediterranean